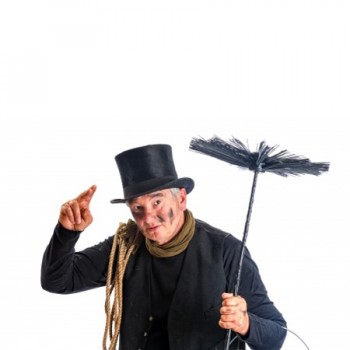 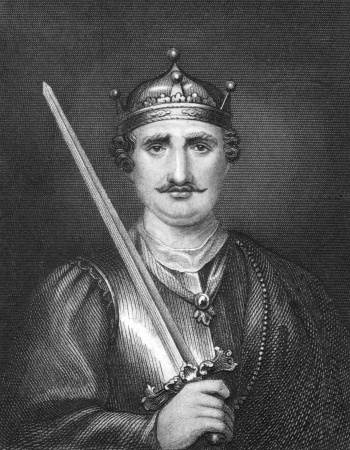 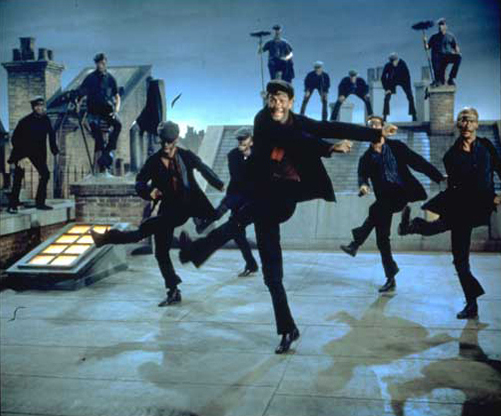 Ways to Spruce Up Fireplace for Christmas 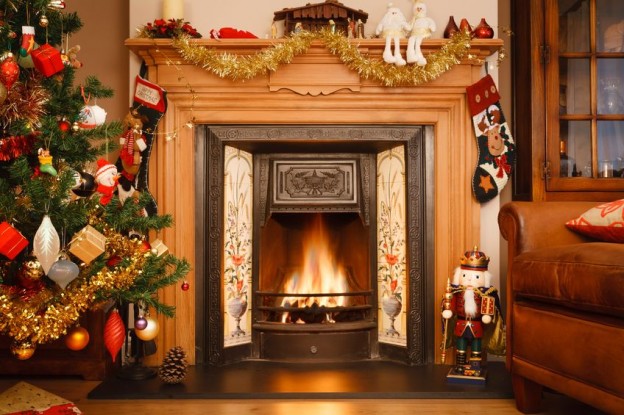 Use these 6 ideas to spruce up the fireplace for Christmas and your holiday guests:

looks unkempt.  You can either scoop ashes with your fireplace shovel into an ash bucket or you can vacuum out the cold ashes with an ash vac.

The ash vac has the advantage of cleaning out the super-fine ash dust that finds its way into cracks.

Whether you use sweep or vacuum, first open the damper and crack a window in the room with the fireplace.  Any airborne ash dust will then be drawn up the chimney as you clean instead of drifting into your room. Wondering what to do with those ashes now?

Three areas of a wood-burning fireplace are susceptible to soot and stains: the mantel, the bricks or stones surrounding the fireplace opening, and the interior of the firebox.

A soot eraser is usually sufficient for cleaning smudges from the fireplace mantel.

There are two methods of cleaning the bricks surrounding the fireplace and the interior of the firebox.  If you are not adverse to elbow grease, click here for cleaning instructions.  If you would prefer a no-scrub method, we highly recommend Paint N Peel, a product specifically designed for professional chimney sweeps to use to clean inside and around the fireplace. Paint on a thick layer of Paint N Peel, let it dry thoroughly (usually 24 hours, depending on the humidity), and then just peel it off.  As you peel it away from the fireplace, the soot and stains are lifted from off the surface and from inside cracks. 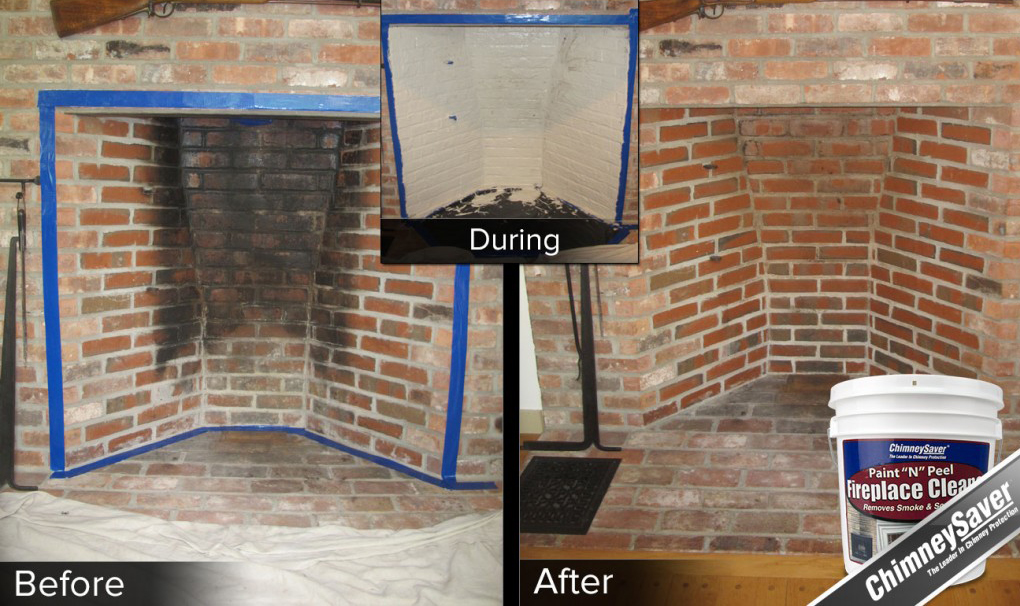 Before and After photos courtesy ChimneySaver, the manufacturer of Paint N Peel.

Sweep the area right in front of the hearth.  If you have a slate hearth, wash and dry it and then wipe it down with lemon oil for a pristine shine. See directions for cleaning a slate hearth here. 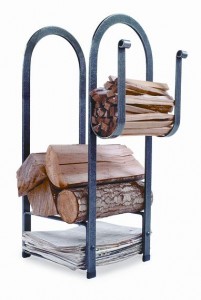 Everything from fireplace gloves and matches to newspapers, kindling and logs can end up dominating the hearth and detracting from the beauty of your fireplace. Log holders with storage shelves control that clutter.

Containing all the fire-making supplies in one tidy accessory is a great way to spruce up a fireplace for Christmas or any other time of the year.

5.    Remove clutter from the mantel.

Before you decorate the mantel for Christmas, get rid of any clutter that might have accumulated there.  You know: the things that ended up on the fireplace mantel simply because they were in your hand and the mantel was the nearest surface.

6.   Fill the fireplace with fire.

Now build a welcoming fire in your fireplace.  Nothing says “welcome” to holidays guests like an inviting fire in the fireplace. Read fire-building tips here.

If, however, you don’t burn firewood in your fireplace, insert a fireplace candelabra with candles into the firebox. When the candles are lit, you get all the hospitality of a fireplace fire, but with candle light instead of firelight.

Whether you are awaiting Santa or other holiday guests, a clean, orderly fireplace and hearth is an instant face-lift for the whole room.  In addition, both Mr. and Mrs. Claus appreciate your ash-free and soot-free fireplace. 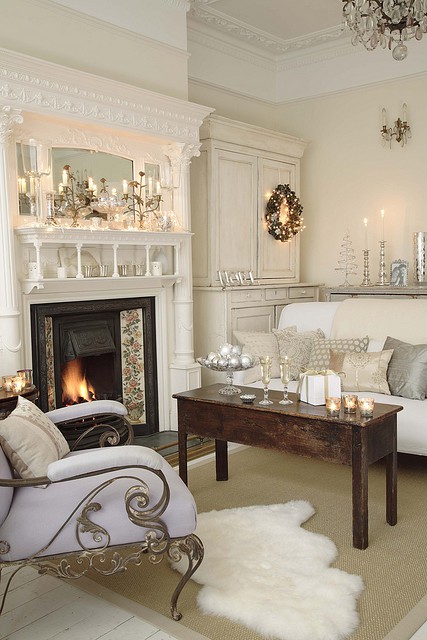 Snow is capable of turning the most ordinary of settings into a magical wonderland, including your holiday fireplace mantel. Take a look at the elegant white Christmas mantel above (photograph by Sussie Bell.)

The look of snow’s shine and shimmer is captured through the use of all white decorations, accessories and even furniture upholstery accented with lots of silver and mirrors. While your home may not include all white furniture and an antique fireplace screen you can certainly re-create this sophisticated look. Search for:

Arrange any or all of these ornaments in a fashion that best suits your décor. For example, if you prefer a formal setting similar to the one shown in the photo you might want to use a symmetrical arrangement on your mantel.

On the other hand, if you prefer a more casual feel but still like an all-white theme, try capturing the look and feel in the room below by Centsational Girl blog. 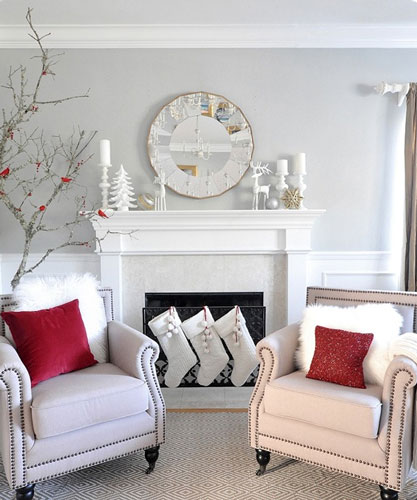 This all white Christmas fireplace mantel decorated by Centsational Girl
is accented with a bright punch of red.

All white ornaments that include spray painted candle holders, ceramic holiday trees and deer statues and the occasional snowball or snowflake adorn the mantel that is topped with a mirror that sparkles like snow. Even the fireplace accessories receive a touch of white Christmas with casual knit stockings hung on the fireplace screen. A simple fallen tree branch receives a coating of snow and is adorned with little red cardinals to add just the right punch of color.

If you would like to capture the look of a snowfall on your own holiday White Christmas mantel, keep an eye out for:

A snow themed holiday fireplace mantel is simple to accomplish and the best part; no need to bundle up to enjoy the magic of snow. No need even to wait for real snow to have a White Christmas mantel. 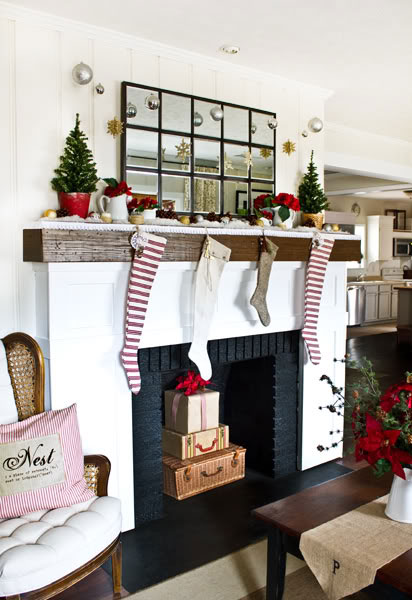 Do you knit? Do you sprinkle glitter on anything that isn’t breathing? Is your glue gun always loaded and ready? If you answered yes to any of these questions then a hand-crafted Christmas fireplace mantel is perfect for you.

You do not have to be a master crafter or expert seamstress to recreate the charming and hand-made look and feel of this Christmas mantel.

The stockings were hung by the chimney with care.

Stockings are a staple in any holiday fireplace mantel décor and are made even more special when they are lovingly hand-crafted. Consider starting with an applique or needlepoint Christmas stocking kit. 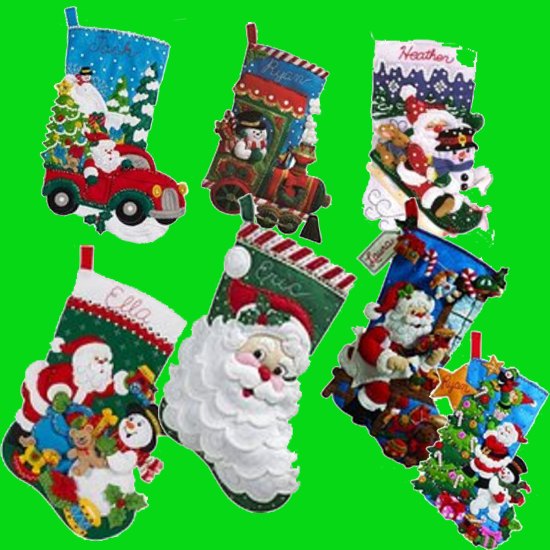 Use a Christmas Stocking Kit to create a handmade stocking.

If you can knit you can make the vintage looking red and white striped stockings or use any pattern from a Christmas Stocking Knitting Kit that you think will entice Santa Claus to fill it to the brim! 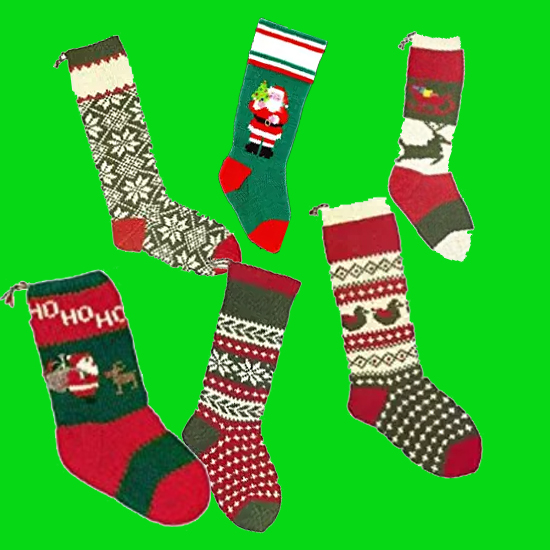 Find a knitting pattern for the Christmas stocking of your choice.

For those of you who sew, or pretend to sew with the miracle we know as fabric glue, create socks out of muslin, burlap or scraps of fabric. Adorn them with buttons and trinkets or hand-embroider individual names so there is no confusion come Christmas morning.

Is there anything more magical than a white Christmas? I remember cutting out snowflakes from plain white paper and hanging them on the windows with tape. Take that same idea but dangle them in front of a mirror for double the pleasure. You can add glitter and even make three dimensional versions for added effect and dimension. Simply hang them with clear fishing wire to replicate the look of a snowfall.

And don’t forget the fireplace tools. Add a snowflake or two to the tool set to carry the theme all the way down to the floor.

Kids will love this project. Just for fun, write the name of the “artist” and add the date and see how the snowflakes improve in appearance as you pull them out each year.

You can make your own candles, use battery operated and flameless candles or wrap traditional white candles with burlap ribbon and add a sprig of holly picked from your front yard. For safety, be sure the flame of the candle is nowhere near the ribbon or greenery and never leave a burning candle unattended, especially if little ones are snooping around the fireplace.

The Christmas theme continues on this fireplace mantel with simple, small green Christmas trees placed in pots and poinsettias fill a collection of white pitchers . Painted gold and silver balls add a touch of sparkle and shine. As an additional fireplace accessory and to personalize this mantel use the monogrammed table runner as a mantel scarf.

A hand-crafted Christmas is a great way to use items that are readily available and to save money. Here are some good sources of how to make homemade ornaments for Christmas. More importantly, making Christmas ornaments and fireplace decorations is a great new tradition to bring the family together during the holidays…and isn’t that what it is all about?

Above photo: A charming Christmas fireplace mantel decorated with easy to make
decorations from the Lettered Cottage Design Blog