Chimney Caps for Round Flues

Selecting the Right Round Chimney Cap for Round Flues:

What Kind of Round Flue Do I Have?

With any existing chimney cap removed, look down your flue and match it with one of the drawings below. The discussion next to the drawing will tell you what kind of flue you have and what types of round chimney caps are appropriate.

The drawing at the left shows a double wall air cooled flue. The flue has an air jacket outside of it. Air circulating between the two walls cools the flue. For this reason, you’ll need a round chimney cap made expressly for a double wall air cooled flue. The chimney caps below are all designed to let cooling air circulate properly in the air jacket. Choices include:

Solid pack flues have insulation sandwiched between two layers of metal. These are sometimes called double wall insulated flues or solid packed insulated flues. In most, the insulation is sealed in by metal ring at each end of a section of flue pipe. When you look down the flue, you will see these seals, not the insulation material itself.

Chimney caps for round flues that have covered insulation include: 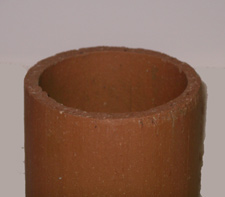 Pictured at the left is a clay flue, which is also called a masonry flue.

These are pipes made of terra cotta—like a flower pot.

Appropriate chimney caps for round flues made of clay masonry  include:

Single Metal Pipe such as a Stovepipe

You can use with metal, single wall flues the following chimney caps for round flues:

When chimney professionals re-line chimneys, they may use a flexible metal flue liner, like the one shown at the left.

Round chimney caps used with flexible metal liner include: