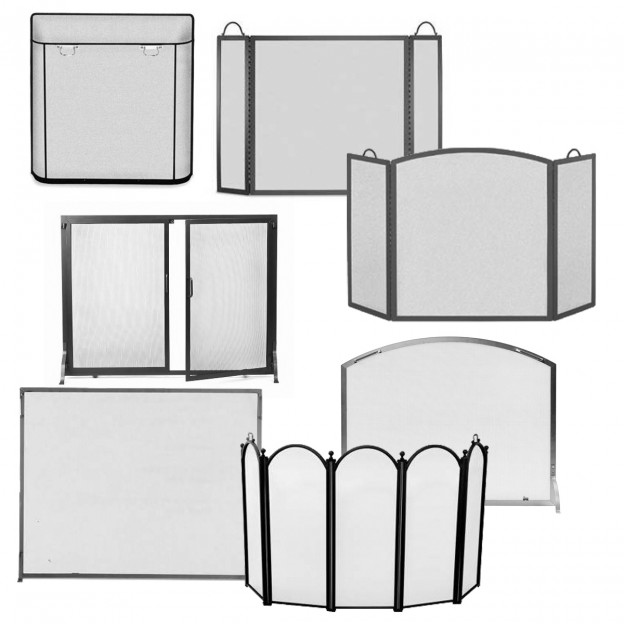 A Quick Guide to New and Traditional Fireplace Screen Shapes →

There is also a distinction between fireplace screens and fireplace spark guards.

Curved single panel fireplace screens have a gentle bow in them that allows them to stand without feet. Placed in front of the fireplace, each side edge of a bowed screen is against your fireplace wall, but the middle of the screen bows out a bit from the fireplace opening.

Three-panel, four-panel, and five-panel fireplace screens are piano hinged between each panel. This allows you to position the side panels to fit the width of your fireplace.

Three panel fireplace screens are probably the most familiar style. The middle panel is typically about twice as wide as each of the side panels. Three-panel screens are often favored for traditional settings.

Some have bowed panels; each panel is gently bowed so the entire screen forms one, continuous bow when placed on your hearth.

The arched screens—whether each panel is individually arched or the screen as a whole has a single arch—can add visual interest and drama to your hearth.

A separate category of screen is the “spark guard.” Spark guards are screens that not only protect sparks from coming straight out from your fire into your room but also protect you from sparks that might shoot up-and-out into your room. Typically, they look much like a three-panel screen with two important differences: First, an additional top section of screening goes from the top of the three panels up to the fireplace wall. Often this top section of screening is shaped like the curved section of an old fashioned roll-front desk. Second, none of the panels is hinged. The entire spark guard is rigid. To tend a fire, handles on the spark guard allow the rigid unit to be picked up and moved away from the fire.